Home › Uncategorized › The “New” Left Side

The “New” Left Side

Anyone who took their time getting to Firestone Stadium this year saw a second half of the season that featured Kelley Montalvo and Brigette Del Ponte scooping up everything that came their way and making plays on the run unlike any seen in Akron for awhile. What they didn’t see was the carousel of infield positions the BDP had to go through before settling down at shortstop. If you didn’t see it from the beginning you couldn’t possibly appreciate the progression and hard work it took to make Brigette Del Ponte a Rookie of the Year candidate.

The biggest shock to people may be that for Brigette to prove herself and be an everyday player, it would take the misfortune of her now right hand man Kelley!

The long awaited Kelley Montalvo Night didn’t go quite as planned. Kelley had to be replaced at the hot corner because she was stuck out of town on a recruiting trip. The only player who could logically fill in at third was Del Ponte, who played there her first three years at Arizona. July 11th would be the day Brigette Del Ponte would officially arrive! At that point BDP had 8 errors in 19 games playing every infield position besides first.

Del Ponte dazzled immediately! Making quick reflexed stabs that we are used to seeing every single day from Kelley. That success carried over to the plate for Brigette…in a big way! 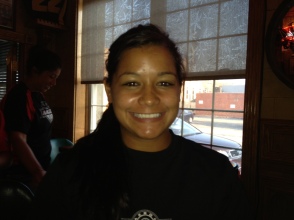 Coming into her second start at third in the Comets series BDP was hitting a season low .167. The next three games everything she hit left the park, literally! Four hits, four home runs, and seven RBI’s. That Comets series was Brigette Del Ponte’s coming out party for sure! “I changed up my swing a little bit, I shortened it.” Del Ponte said after the series. “I’ve been thinking too much lately so I just go up there close-minded and play.”

“Coaches gotta do what they gotta do and I just got to keep swinging the bat.” Comments Brigette when asked about the possibility of losing playing time with the return of Montalvo, “Obviously I know what I can do so I just have to keep my confidence up.”

I’m sure there was questions in just about every person mind whether this production could continue and where BDP would fit in the lineup, but it certainly not at third while Kelley Montalvo is a Racer, and Brigette was aware of that. “My first 3 years at U of A I played third, I’m comfortable there and I know what I’m doing. I just react and don’t have to think.” Comments Del Ponte, “That’s Montalvo’s spot, that’s not my spot, hopefully I’ll fill in every now and then for her.”

Although BDP had arrived it wasn’t exactly smooth sailing after the Comets’ series. In the four games following she played primarily 2nd base and hit 1-10 without an offensive statistic to show for it…

Until July 25th, the day she settled in at shortstop for the remainder of the season…

Even with all those improvements at the plate the most impressive stat is the one that will set her and Monte apart in this league. In Brigette’s first 19 games she had 8 errors, since the Mid-July Comets series she has had only 4 in 27 games! “Hands down! She’s out here taking extra reps, out here trying to get better and figuring out.” Kelley says about Brigette’s improvement, “I commend her a lot, getting a new position and playing at this level is awesome!”

The defensive we are used to seeing from Monte, is now also being displayed at shortstop. I do not have to remind anyone who seen BDP make a diving Willie Mays catch all the way out of play, which could easily be the play of the year! All the plays that Brigette makes on the run on tough hits has reduced the amount of base runners the Racers pitching staff has to deal with as Montalvo mentioned. “I love having Brigette on the left side right there, I love how we can communicate. I feel like the young ones are starting to buy in and the defense comes together and it helps our pitchers out.”

From what we see on the field these two play together extremely well! There’s more double plays being turned then before, not many hits are getting through the left side, and we see daily highlights. “Monte and I have good field chemistry. We talk to each other every pitch, literally every pitch.” Explains BDP, “She’s always staying positive, when I get mad she’s always bringing me up, it’s awesome.” Monte cites a great relationship off the field as a huge positive asset for the duo, “I’m telling you Brigette and I are good friends off the field so I think that has something to do with it as well.”

Monte, the 2012 Defensive Player of the Year, talks about the future with lots of excitement! When I mentioned that the way she talks about playing with BDP that that means her future with the Racers is set in stone and she happily replied that ‘the body still feels good’ and she’s not ready to hang up the cleats just yet. Whether Del Ponte belongs on a talent and performance aspect has already been established with a huge exclamation point. On the other hand is the NPF something she can continue with given the sacrifice it takes for a player to commit is yet to be seen. If it is, fans and the rest of the league better be prepared to see a couple players who are expecting to be the best left side in the NPF!

Rich on the Radio!